Home > How to wear your engagement, wedding and eternity rings

How to wear your engagement, wedding and eternity rings

During a marriage there are different rings that will help you mark a special moment or milestone so it can be quite confusing to know how to wear them. Luckily, it is quite simple: you wear your engagement ring on the fourth finger of your right hand once you got engaged. Once you get married, you just need to move your engagement ring to your left hand and place the wedding ring on top. The tricky one is the eternity ring because it doesn’t have a designated finger or hand this one is up to you. You can wear it on top of your engagement and wedding ring or wear it on the opposite hand by itself.

The options might seem endless and dazzling but once you know what is the purpose of each ring you will avoid any mistakes. So here’s a rundown what each ring is where to wear them to help you.

What are wedding rings?

Representing an infinite and eternal love, a wedding ring is the perfect symbol of the promise of a lifetime together. These rings are exchanged between a couple on their wedding making them the ultimate symbol of love.

Popular among the Greeks and Romans, wedding rings can be traced to the same period as engagement rings. Originally worn by the wives, wedding rings are now worn by both spouses. Fun fact, in the United States it wasn’t until the 20th Century that the use of rings for both spouses became customary.

Wedding Rings: Which finger should you wear them?

Thanks to ancient cultures believing that there was a vein called ‘Vena amoris’ that lead directly from a finger to the heart, wedding rings had been placed on the fourth finger on the left hand for centuries. Unfortunately, that vein doesn’t exist but the tradition stay.

When placed together with other rings, the wedding band needs to be placed first, so it is closer to the heart.

What are engagement rings?

Engagement rings are believed to have been originated from the Roman tradition where women used to wear rings link to tiny keys to represent their engagement. There were two ring’s designs that were quite popular during the 15th through the 17th century in England and France, one of them called Gimmal featured two to three links that fit together forming one ring. The other, called posie, was a metal band that featured a short inscription on its surface.

Archduke Maximillian of Austria created the first ever recorder diamond engagement ring, back in 1477. He presented it to his fiancé, Mary of Burgundy and became an instant trend among the European aristocracy, helping it become the tradition that it is today.

Engagement rings are given by a partner to their prospective spouse to propose marriage to them. If it is accepted, the person – customarily the woman, will wear it suggesting that he or she is engaged to be married. Once they are married, the bride or groom to be will remover their engagement ring and put it back afterwards.

Engagement Rings: Which finger should you wear them?

Engagement rings are generally worn on the fourth finger of your right hand while you are engaged and then, after getting married, the ring should be moved to the opposite hand (same finger).

This ring should always be placed on top of the wedding band.

What are Eternity Rings?

Eternity rings are perfect to celebrate a marriage’s milestone, since these rings are given separately from wedding or engagement rings.

Eternity rings are usually given to celebrate the first wedding anniversary or the birth of the couple’s first child.

Traditionally known as a symbol of eternal love and luxury, eternity rings feature identical cut diamonds encrusted all around the metal band. Thanks to this, they have a beautiful sparkle that shines around the band. Eternity rings can also feature gemstones like emeralds or sapphires, a great option for those who love a bit of colour.

Eternity Rings: Which finger should you wear them?

Eternity rings don’t have a designated finger or even a hand. Some say you should wear it on top of your wedding and engagement ring, others in between those two.

A good alternative for those who have a bigger engagement ring, you can wear eternity rings on the opposite hand.

Tradition dictates that once you are married, you should wear your wedding ring first so it is closer to your heart and engagement ring second. Both of them are worn on your third finger of your left hand.

You can even wear them separately, one on each hand. However, the wedding ring should remain on the left hand and the engagement on your right hand. This option is good for those with short fingers since having two rings on a single finger can make it look visually shorter.

Since eternity rings don’t have a preferred place, you can create your own rules here. Wear the three of them together on one finger or wear it separately on the opposite hand. This option will suit those who have a very active lifestyle.

There are many ways you can wear these rings; you could follow the tradition or be a trendsetter and wear them in your own unique way. Just remember that the important part is that fits comfortable on you. 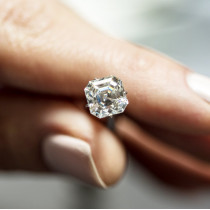 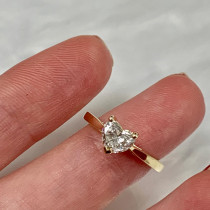 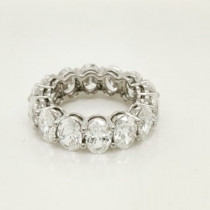 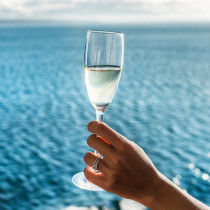 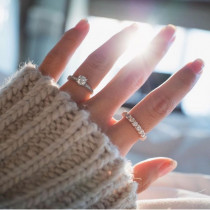 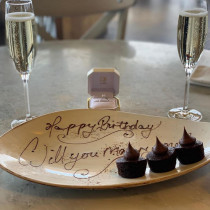